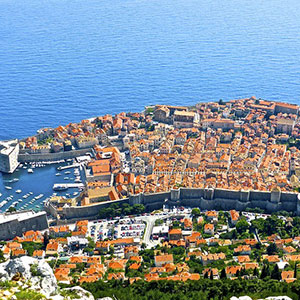 Starting in the medieval walled city of Dubrovnik, also a filming location for Game of Thrones, and ending in Rome, the ancient capital city of the Roman Empire, this affordable Mediterranean vacation packs in even more fun through the less-traveled countries of Montenegro and Albania. Originally settled by Venetians, Kotor, Montenegro is an architectural and atmospheric port that sets the stage for lavish leisure. Whether you choose to sip the region’s beloved honey brandy or indulge in the catch of the day, it won’t take long to be captivated by this seaside citadel. With its mostly flat roadways, the pastel-painted Albanian city of Shkodra is known as the City of Bicycles. Enjoy the pleasant lake, fortress and village views and the country’s capital city Tirana. What better way to end an overnight ferry ride across the Adriatic Sea than to wake up Italy’s historic port city of Bari. Weave your way through the maze of side-streets toward the Basilica of St. Nicholas, an important pilgrimage site. Next day, travel to legendary Sorrento, set like a gem on the Golf of Naples and home of Limoncello and many other delicacies. End your Mediterranean adventure in Rome, having discovered off-the-beaten-path surprises that delight and inspire on your budget-friendly tour of the undiscovered Eastern Mediterranean.

Fairy-tale houses that look like chanterelle mushroomw. Alberobello’s little round houses with the cone-topped roofs are called trulli – and they are truly unique. Their origins are ancient – some date from 3000 B.C. And they are only found here.

Rome wasn’t built in a day…but you can tour it in just over 10 hours. A teeming anthill of humanity and antiquity intermingled with awful traffic jams, Rome grew up on the Tiber (“Fiume Tevere”) among seven low hills that rise from the river’s soggy eastern banks. It’s a city of many peeling layers of history, of which the bottom layer–that of the earliest Roman centuries–is the most interesting and still astonishingly whole. The hub of this layer is the Palatine Hill, the Forum, the Colosseum and the Circus Maximus.

On the western bank is the Citta Vaticana, the independent papal city where the Pope blesses pilgrims from all over the world. Neighboring Trastevere (“Across the Tiber”) is a mix of Roman, Greek and Jewish subcultures, great for little restaurants and nightlife. Further north on the other bank is “vecchia Roma,” medieval Rome of the Pantheon and Piazza Navona; Renaissance Rome is centered south of the Corso Vittorio Emanuele. Commercial Rome is the city of the Via del Corso, the Piazza del Popolo, the controversial Victor Emmanuel monument and finally the Stazione Termini, the nexus for all trains and roads from Rome.

Prices are per person, land or cruise only, based on double occupancy. Offer subject to availability and change without notice. Some restrictions may apply. Please ask us for details.

Charges not included in the land vacation price: airfare to and from the start of your vacation; airline baggage fees including checked and/or excess baggage fees; Federal inspection fees for the Federal U.S. Customs and Immigrations; agricultural tax; other per person taxes imposed by government entities; applicable cruise taxes, fees, fares and port charges; passports; visas and vaccinations; transfers; tips to your Tour or Cruise Director, Local Host, driver, Local Guides, and/or ships’ crew; gratuities on ferries, trains, and cruise ships; laundry; telephone; minibar; alcohol, beverages, and food outside of the contracted menu as presented at a hotel or restaurant (these extra items will be billed to you before leaving the hotel, ship, or restaurant); additional excursions and activities not listed as ‘included’ in the itinerary; porterage at airports or train stations; Travel Protection premiums; and all other items of a personal nature.

Click on the buttons below to request a quote on this deal or contact us directly with further questions or comments.

Request A Quote Send To A Friend Have A Question? Contact Us

Send To A Friend

Please don't close or refresh the page while we are processing your submission
Please be patient, this could take a few minutes.